The Ottoman rule of Palestine in the 19th century largely saw the peaceful co-existence of a Muslim majority and a Christian and Jewish minority population, with large sections of the population simply identifying themselves as Arab, rather than Palestinian. The defeat of the Ottoman Empire during the First World War led to the annexation of Palestine by the British Empire. This also coincided with a large number of Jewish refugees seeking refuge in Palestine. The establishment of a Zionist settlement for the Jewish population can be traced back to 1882, with the earliest demand for a separate Jewish state expressed in Thomas Herzl’s newsletter, Der Judenstaat. The city of Jerusalem was regarded as ancestral land by the Jewish population, a claim which was refuted by the Palestinians on grounds of self-determination and sovereignty. Eventually, the Palestinian opposition to Zionism culminated in the Balfour declaration by the British in 1917. It supported “the establishment in Palestine a national home for the Jewish People” and was introduced by the British to win Jewish support.

‘Mandatory Palestine’, which came into effect in 1923, drew its name from the League of Nations mandate that facilitated its existence. It legitimised British rule in the region and tasked them with the creation of a Jewish state in the region. Faced with the twin challenges of the waning of popular support for British intervention in Palestine, and the confrontation of a home economy ravaged by war, the British Government was forced to terminate its mandate in Palestine in 1948. The ‘Palestinian Question’, as it was then known, was left to the newly established United Nations.

Creation of the state of Israel and Expulsion of Palestinians (1947 – 48):

The United Nations adopted a partition plan for Palestine termed Resolution 181 – a measure that proved to be unpopular amongst the Palestinian population – even with rapid migration, gerrymandering of borders, it was impossible to carve out a portion of land with a clear Jewish majority as the migrants constituted a small portion of the total population. Discontent surrounding the partition had led to a decade of violence between both communities in the 1930s culminated in a full-fledged revolt from 1936 – 39. Resolution 181 came to be implemented and in May 1948, David Ben Gurion was recognised as the prime minister of the newly independent state of Israel. International support for Israel was evident from its immediate recognition by the United States and the Soviet Union.

While the settlers of Israel revelled in their newfound statehood, for the Palestinians, the fateful day or al nakba (the catastrophe) as it came to be known,  signifies the trauma of occupation, an oppressive statelessness that informs the Palestinian national identity and resistance to this day.  Initially, the upper and middle class elites within Palestine fled to escape the violence within the country. In 1948, the Israeli government launched concentrated efforts, such as the Deir Yassin massacre, to ensure the displacement and massacre of Palestinians. Israeli militia were employed to create terror and military campaigns like Plan Dalet attempted an ethnic cleansing of Arab communities to produce a wholly Jewish settlement. Palestinians fled the country in droves, with an estimated 700,000 – 800,000 seeking refuge in neighbouring countries. The remaining minority population was placed under martial law and Israel systematically erased evidence of Palestinian society through the renaming and sometimes, annihilation of old towns and villages and massive expropriation of nearly 80% of Palestinian property to settlers. The Palestinian refugees were not allowed to return to their homeland and many lost their properties and homes. Their displacement was seen as conducive to the emergence of a Jewish majority state. The Palestinian minority still living in Israel was granted citizenship in 1967.

The experience of the nakba was fundamental to the development of national Palestinian identity with refugees, Palestinians living under Israeli occupation and the few second class Arab citizens of Israel united through the shared experience of the ongoing horror of occupation. In December 1948, the UN General Assembly passed Resolution 194 providing support for the return of Palestinian refugees and in 1949  established the UNRWA for their welfare. 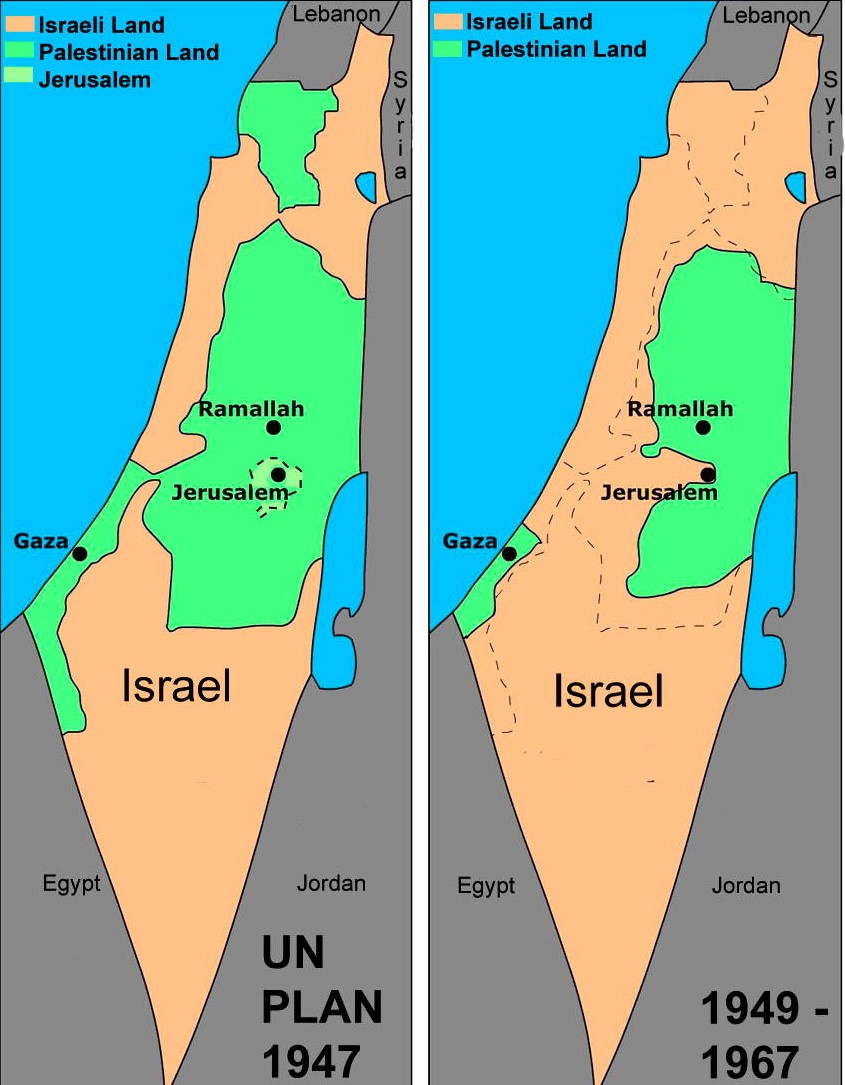 The Egyptian Israeli General Armistice Agreement was signed in 1949 under the aegis of the United Nations and was meant to facilitate peace in Palestine. It condemned the use of violence or military force in the settlement of the conflict in Palestine. It also stipulates that the provisional boundaries of Israel and Palestine were not to be taken as a formal political or territorial boundary.

The West Bank was annexed by Jordan in 1950 and it consequently came to account for thirty per cent of Jordan’s Gross Domestic Product. Jordanian annexation was unacceptable to Israel and Palestinians living in the Israeli occupied areas were viewed with suspicion.

The Six Day War, the third of the Arab – Israeli wars, took place from June  5- June 10, 1967. Israel’s decisive victory in the war was conducive to the state’s occupation of the Egyptian Sinai Peninsula, the West Bank, the Gaza Strip, the old city of Jerusalem and the Syrian Golan Heights, all of which went on to become central points of contention in the conflict. The war came to an end after a call for a ceasefire from the UN Security Council. Months after the war, the UN passed Resolution 242 which mandated Israeli withdrawal from the occupied areas in exchange for lasting peace.

Meanwhile, Israeli aggression within this period led to the formation of the Palestinian Liberation Organisation (PLO) in 1964 to facilitate the centralisation of various disjointed pro-Palestinian revolutionary groups. The PLO was dedicated to the cause of Palestinian self-determination and the disintegration of Israeli occupation. The radicals within the PLO favoured the complete disintegration of Israel and the establishment of a secular state to facilitate the co-existence of Arabs and Jewish people. The moderates supported the establishment of a separate, sovereign Palestinian state, separate from Israel.